24. 11. 2016
Better public health and prevention policies as well as more effective health care could save hundreds of thousands of lives and billions of euros each year in Europe, according to a new joint OECD/European Commission report. 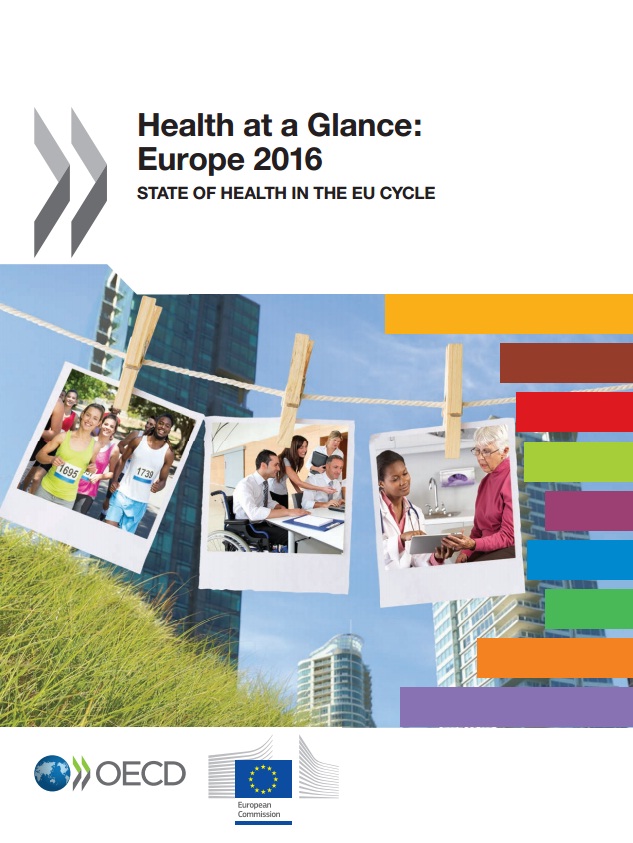 Besides the loss of lives and the human tragedy that this always entails,  Health at a Glance: Europe 2016  estimates  that  the  premature deaths  of 550,000 working-age people across European Union countries from  chronic diseases,  including heart attacks, strokes, diabetes and cancer, cost  EU economies EUR 115 billion or 0.8% of GDP  annually. This figure does not include the additional  loss in terms of lower employment rates and productivity of people living with chronic health problems.

While earlier diagnosis and better treatments have substantially increased the share of people surviving these diseases, many countries ─  including the  United Kingdom, Ireland and especially some Central and Eastern European countries ─  lag behind in terms of cancer survival rates.

The burden of ill-health on social benefit expenditures is huge,  with 1.7% of GDP spent on disability and paid sick leave each year on average in EU countries, more than what is spent on unemployment benefits. Yet  EU  member states allocate only around 3% on average of their health budgets to public health and prevention.

Further investment in prevention,  along with measures  making   it easier  for people with disabilities to work,  would bring significant economic and social benefits in EU countries, says the report.  It would also help countries achieve the ambitious targets in Sustainable

Development Goal 3: Good Health and Well-Being. “Many more lives could be  saved if standards of care  are  raised to the best level across EU countries,” said  OECD Secretary-General Angel Gurría, launching the report in Brussels with  European Commissioner for Health and Food Safety Vytenis Andriukaitis. “More needs to be done to reduce inequalities in access and quality of care, and  European health systems  must become  more efficient in channelling resources  where they have the most impact on health outcomes , including on prevention.”

Commissioner Andriukaitis added: "The Health at a Glance report provides useful information for Member States to shape their actions on health across all policies. It shows that in the EU many people die every year from potentially avoidable diseases linked to risk factors such as s moking or obesity. It also highlights the need to continue our efforts in making sure that healthcare becomes more accessible. The report represents the flagship of the partnership between the Commission and the OECD to develop country -specific and cross-country knowledge on health and health systems, as the first step of the 'State of Health in the EU'.”

The report notes that the  large gaps  in life expectancy across countries  are compounded by wide gaps within countries – between the least and most educated, between the poorest and richest. On average across EU countries, the life expectancy of people with the lowest level of education is seven years shorter than for the most educated.  The gap is particularly large in Central and Eastern European countries, especially for men, because of greater prevalence of risk factors.
The  number  of low  earners  reporting limited access to health care for financial reasons  also increased in several  EU  countries after the global financial crisis.  In Greece, the share of poor people reporting unmet medical care needs due to cost has more than doubled since 2008, rising from 7% in 2008 to over 16% in 2014.

Strong primary care systems can play an important role in reducing health inequalities  and in tackling  the changing needs of an  ageing  European population. Ensuring that  primary  care providers are  accessible wherever people live, be it in rural and remote areas   or  in poor city neighbourhoods,  is crucial to reduce health inequalities and the number of avoidable hospitalisations  across EU countries.

Health at a Glance: Europe 2016  shows slow growth in health spending in many EU countries in 2015,  collectively accounting for  9.9% of  EU  GDP.  Germany, Sweden and France each spent around 11% of GDP on health care, closely followed by the Netherlands and Denmark (at 10.8% and 10.6%, respectively). Countries in the Eastern part of the EU tend to spend much less, with shares ranging from 5% to 6% of GDP.

In all countries, the health spending share of GDP is projected to  increase in the coming years due mainly to population ageing and the diffusion of new diagnostic and therapeutic technologies.
Health at a Glance: Europe 2016  is part of the renewed co-operation between the OECD and the EC to implement the Commission’s “State of Health in the EU”  initiative . More information on  this flagship report  and country-specific notes for France, Germany, Italy, Spain and the United Kingdom are available on this link.

Working with over 100 countries, the OECD is a global policy forum that  promotes policies to improve the economic and social well-being of people around the world.

Ministry of Health of the Republic of Slovenia

Home page of Slovenian Ministry of Health in English.